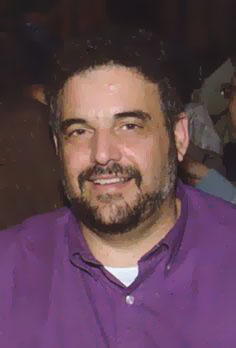 I lost my son this year. This is the hardest thing I’ve ever had to endure. Not only did our family lose John, but the Trophy Cup lost a piece of the heart of its existence.

John was introduced into the race community as a child, running around the pits at San Jose Speedway. Always a fan first, he dabbled in racing micro-sprints at Baylands and motorcycle hill climbing. John played an instrumental role in the Trophy Cup from day one. At the start, John created our first t-shirts, produced the early programs (until his talented wife took over), and created the website we used until just this year. He worked the stands and pits in the early days selling 50/50 tickets, programs, shirts, and raffle tickets. As the race evolved, John worked throughout the year to grow the raffle and t-shirt booth into a successful means to raise funds. He worked with Make-A-Wish to organize and transport raffle prizes, he donated items to the raffle, and had Hot Wheels and Racing Champions sprint cars created to commemorate the race; all to benefit Make-A-Wish. John was always thinking, innovating, and working on ideas to benefit the Trophy Cup and consequently Make-A-Wish.

John was a great father to his daughter, mentor to employees and a loyal friend. Words used by those who knew and worked with John: passionate, generous, resourceful, quick-witted, intelligent, empathetic, compassionate, insightful. He had integrity, dedication, and while his honesty sometimes got him in trouble, his light-hearted teasing showed how much he cared for you. John was a great coworker and team player, employees have said ‘somehow his sarcastic humor made getting up before the crack of dawn to go to work enjoyable’. He stood up for so many, most never knowing he had done so, paving the path for important changes in the work place and beyond.

John was a good soul with a kind heart who left us too soon. He always thought of his daughter and wife first. He was considerate and loving, never doing anything without first thinking of the people he might impact. He was a self-taught computer nerd and would drop everything to fix my computers and engravers or whatever else I could break. John loved cooking, travel, doing things for his family, dogs, random facts and the color magenta. He was a son, brother, father, uncle, husband, friend, and leaves us all devastated at our loss.

You are sorely missed.
May You Rest In Peace.