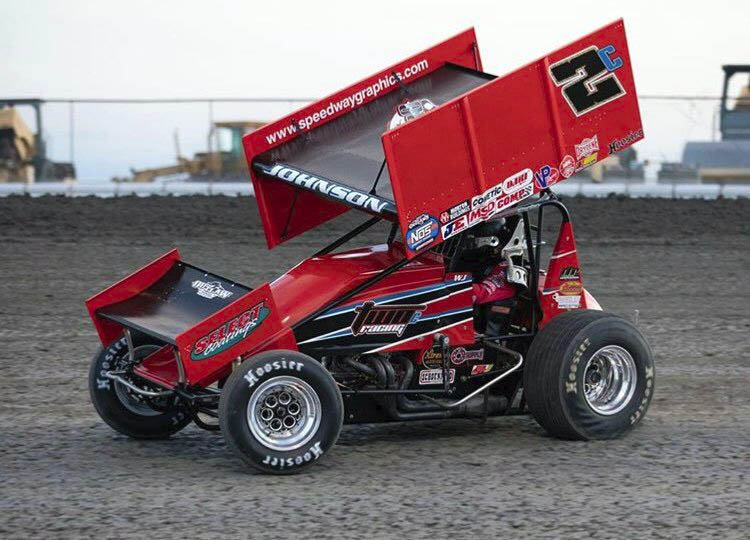 Wayne Johnson and car owners Todd and Kelly Carlile changed their approach to their race schedule this year. They created a bucket list of events they most wanted to race.

At the top of the list is the Trophy Cup.

This week their entry became official and Johnson is the 103rd car to enter the Abreu Vineyards 26th Annual Trophy Cup Presented by Rudeen Racing. The Tulare Thunderbowl hosted event offers a purse of $200,000+ for winged 360 sprint cars and runs a format that requires passing to do well. To be exact, lots of passing.

The Carlile’s were a sponsor on the Wayne Johnson ride in 2012 and started their own team in 2016. Johnson has been their driver since creating the 2C team. That included a new way this season of looking at a race schedule.

They decided to make it fun again by not chasing points. They race where and when they want without having the need to be at a point race being a factor. They wanted to come to the Trophy Cup in the past, but a point race conflict made the trip west out of the question.

He estimates having raced at Tulare about five times, once with the Dan Main 35a team in the Trophy Cup around 2008 and the other times with the World of Outlaws. Johnson loves Tulare and felt he got around the demanding 3/8 pretty well with the Outlaws.

At age 47 Johnson has completed 32 years of sprint car racing. Racing to him is everything and he says, “All I’ve ever done is eat and breathe racing. As to going to the lake on a weekend, I think, why?”

He has over 200 lifetime sprint wins and he recalled his first year racing a sprint at age 15, competing at State Fair Speedway in Oklahoma City. He won 4 main events that initial year and finished 3rd (or so) in points. His first win came on his 4th night of racing.

Go karts at age 6 on a paved road course provided his career start. From there it was motorcycles, bicycles, Honda Odyssey racing, stock cars and basically anything he could race he would.

As Johnson put it, “I grew up in a junk yard. We built an enduro car when I wasn’t even old enough to get into the pits from a car out of the junk yard.”

His father and two brothers also raced. Johnson said his brother, Mike, was an excellent driver, winning 19 of 21 main events one year at Sapulpa. But his brother always had other things he wanted to do so racing was when it fit into his schedule.

His car owners have been around racing for a long time and they won a NCRA championship with Dennis Parks driving. They have a paving business and work on many state highways from their Liberal, Kansas home. They also own the J and R Sand Co, Inc.

As July nears, the 2C team expects to race more around Knoxville to get ready for the Nationals in August.

Johnson mentioned a 12 year old driver who he sees as someone who shows much promise as an open wheel driver. Ryan Timms is from Wheatland Oklahoma and strapped his 92 pound body into a 305 sprint for a test session.

Not only did he look good, but Johnson said he lapped the prior race’s main event winner his first time in a sprint. Johnson claims that Timms in on the fast track for advancement and figures he has already won 15-20 times this year in a micro sprint.

Like so many racers, Johnson has spent much of his 2019 season dodging rain while trying to find a place to race. The Trophy Cup is very pleased that Wayne Johnson has chosen to enter their event this year.

The Cup meets Johnson’s criteria by being a race that is special and supports such an important organization as the Make-A-Wish Foundation.