(Tulare, CA – October 10, 2022) With the 28th Trophy Cup ready to tackle Thunderbowl Raceway next week Promoter Steve Faria has announced an extra special perk that will go to the overall point champion at the event.

The driver who wins the overall title at the Abreu Vineyards Trophy Cup presented by Rudeen Racing already goes home with $28,000 in weekend earnings. Thanks to Steve Faria, they will also take home a commemorative 14k solid gold ring engraved with the 28th annual Trophy Cup logo.

Not only will the Trophy Cup champ take home the prize, Faria has also offered up another 14k solid gold ring to be auctioned off at the event to benefit the Make-A-Wish Foundation. The 28th Trophy Cup occurs on October 20th, 21st and 22nd at Stone Chevrolet Buick GMC Thunderbowl Raceway.

“The Trophy Cup is such a great event for an outstanding cause, and we are really ramping up for it,” commented Faria. “I wanted to do something special for the champion this year, so felt that offering up this 14k solid gold ring with the Trophy Cup logo on it was just that. The event is all about raising money for Make-A-Wish and doing another ring for the auction was a no brainer for us a well.” 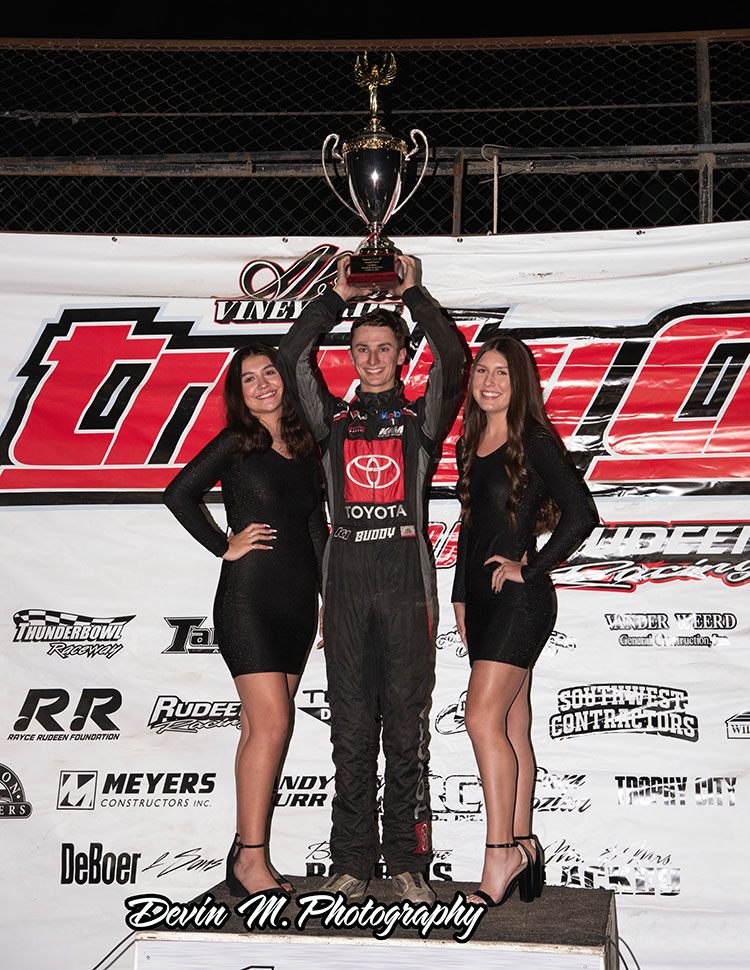 Tickets can be purchased starting at approximately 10am-10:30 each race day behind the stands at the box office. The event has never sold out and plenty of tickets will be available. The pit gate opens at 10am on Thursday October 20th, with the drivers meeting just after 3pm. Wheel packing, hot laps, qualifying and heat races will follow.

The special events that have become so popular are also returning with a slight twist. Following the races on Thursday will be BBQ Night sponsored by High 5 Pizza and Catering, while Friday after the races will be Taco Bravo Fiesta Night featuring Tacos. On Saturday afternoon from 11am-2pm Steve Faria and Thunderbowl Raceway will present the annual Spaghetti Feed.

Both Thursday and Friday nights will showcase Razor Bike Races plus RC car racing for children, while a brand-new function on Saturday includes the Driver Dunk Tank. The post-race parties start 20 minutes after the checkered flag with beer, water and soft drinks also available for purchase inside.

A donation to the Make-A-Wish Foundation at the door during all these events is appreciated. Fans and teams are all encouraged to attend the special eating events. More info on the Trophy Cup, as well as an entry list can be found at www.trophycup.org

For more info on the Stone Chevrolet Buick GMC Thunderbowl Raceway visit www.thunderbowlraceway.com and like our Facebook page at https://www.facebook.com/Tulare-Thunderbowl-Raceway-392991907541396/?fref=ts

The Stone Chevrolet Buick GMC Thunderbowl Raceway is located at the Tulare County Fairgrounds on the corner of Bardsley and K Streets at 620 South K Street Tulare, California 93274. From the junction of SR 99 and SR 137, go west on SR 137. At South K go south one-half mile to the Fairgrounds. Camping is available for fans off turns three and four.