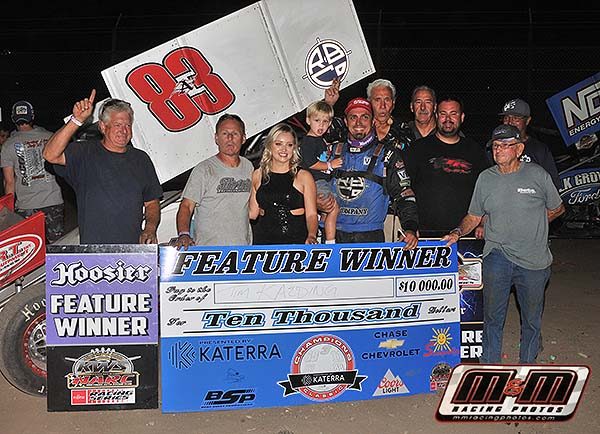 (8/24/19) By Jim Allen, Stockton, CA …  Tim Kaeding clinched the Fastest Four Days in Motorsports title with an impressive $10,000 King of the West by NARC Fujitsu Sprint Car Series victory in front of a huge crowd at the Stockton Dirt Track’s Champions Classic on Saturday.

It was his second victory aboard Rod Tiner’s potent AB Company/Shark Racing Engines number 83 Helix sprinter during the four day event.  He finished third in the other two races to walk away with an additional $2000 from the Sunnyvalley Bacon point fund.  It was his 68th career series win.

Despite the popular victory, Kaeding was very apologetic in victory lane, after inadvertently running into the slower car of Jace VanderWeerd.  While cutting through traffic with just five laps remaining, Kaeding clipped the front end of VanderWeerd’s causing him to flip and bring out the only red flag of the 30-lapper.   Luckily, he was unhurt.

“The first thing I want to say is I apologize to Jace and his team,”  said Kaeding.  “I thought I had him cleared while going past him and I feel really bad.   I know I hit him hard because it shook my head inside my helmet.”

Surprisingly, Kaeding did not sustain any damage to his car, which allowed him to hold off a hardcharging Shane Golobic and King of the West by NARC championship point leader DJ Netto in the late going to secure the win.

“I can’t say enough about Rod Tiner and all of the guys on this team,” continued Kaeding.  “They worked really hard to give me a great race car these past four days.”

ARP fast qualifier and Pole Shuffler winner Dominic Scelzi led the first 10-laps, until Kaeding drove under him in turn one and motored out of the second corner with the lead.  Golobic, who started sixth aboard Matt Wood’s Elk Grove Ford ride, powered past Scelzi with six to go to move into the hunt.   Golobic pressured Kaeding in the late going, but was unable to make anything stick.

Netto may have had the fastest car on the track after the red flag and charged into third with four remaining.  Netto launched a couple of attacks at Golobic, but had to settle for third aboard the Netto Ag/Rotella Shell KPC.

Heat races were picked off by Golobic, Faccinto and Chase Johnson.