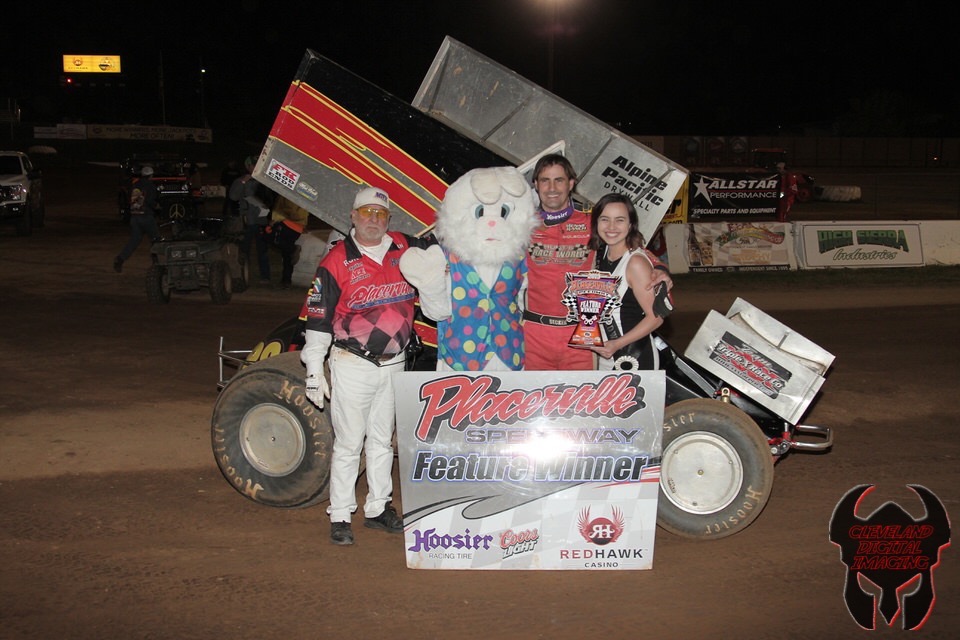 Placerville, CA – April 20, 2019…A wild main event on Saturday night at the Placerville Speedway saw three different leaders and numerous charges through the field, but in the end it was veteran Sean Becker who stood in victory lane after claiming his 24th career Winged 360 Sprint Car victory at the track.

Saturday night marked Becker’s first Thompson’s Family of Dealerships Winged 360 Sprint Car triumph in weekly action at Placerville Speedway since July 22, 2017. His win aboard the Monhoff Racing/ M&M Structures No. 88N also allowed him to tie speedway legend Brian Crockett for fifth on the all-time win list at the quarter-mile. He is now just one-win shy of matching CJ Humphreys and Roger Crockett on the illustrious list.

The 25-lap feature began with Mather’s Kalib Henry jumping into the lead at the helm of the McColloch RV Repair No. 17 machine. A couple of early slowdowns for separate incidents involving round one winner and pole sitter Justyn Cox, along with Aromas, CA’s Justin Sanders occurred, but that wouldn’t be the last we’d hear from each driver. Once things got into a groove racing heated up with multiple lines for drivers to utilize on the tight bullring.
Henry was in search of his first career Placerville Speedway Winged 360 win, but Hollister’s Tony Gualda, also in search of his initial triumph, made his way under for the lead on lap 12. Right after that Becker also sliced his way around Henry to grab second, before a caution occurred with 17-laps complete. Gualda had made numerous passes while rolling the bottom side to perfection, but after going back green went upstairs and Becker patiently ran the bottom to slide up in front of him for the lead off turn four to complete lap 19.

Heading into turn one Gualda tried to sneak back to the inside but ran out of room and spun sideways, dropping multiple spots. Becker was able to hang on before the caution flag waved. When going back green it was all Becker who drove off to take the Ron Stahl checkered flag for victory over Henry and Auburn’s Andy Forsberg. All eyes over the second half of the race, however, were placed on Sanders who made a thrilling charge back through the field to grab fourth at the finish. The always exciting driver ran every square inch of the speedway as he carved through the pack.

Cox also made an impressive run through the field, getting all the way back up to fifth by the conclusion. Rounding out the top-10 were Kyle Offill, Bobby McMahan, Geoff Ensign, Gualda and Jodie Robinson. Young Jesse Love captured the evening’s B-main, with heat race wins going to Tony Gualda, Andy Forsberg, Justyn Cox and Justin Sanders. Gualda began the night by earning his third ADCO Driveline Fast Time Award in three starts this season. His lap of 10.632 topped the 28-car field.

The Jay’s Mobile Welding & Fabricating Pure Stocks also provided entertainment during their 20-lap feature. Point race number one winner Nick Baldwin found himself on the pole of the main event and he jumped out in front and had his way with things for the most part. Early on defending champion Scott Grunert and Kevin Jinkerson had a torrid battle for the second position, racing side by side, lap after lap. Just after the halfway point Jason Leonard jumped up to second and began to hound the rear of Baldwin’s machine.

Leonard kept Baldwin honest throughout the remainder of the race, but the 2016 Jay’s Mobile Welding & Fabricating Pure Stock champ hung strong and crossed the checkered flag by a narrow margin for victory. Leonard’s valiant run ended with him finishing second over Jared Beddow, Jinkerson and Jason Palmer. Dave Silva, Grunert, Mel Byers, Jason Armstrong and Matthew Chacon completed the top-10. Baldwin and Grunert captured the two exciting heat races during the night. A total of 16 Pure Stocks signed into the gate.

The Ltd. Late Models made their first appearance of the season and it saw last years runner up in the points Ray Trimble capture victory in the 20-lap A-main following a dominant run. Last season he claimed one victory overall, so it was nice to see Trimble get one right out of the box on Saturday. Ryan McDaniel, Tyler Lightfoot, Matt Michelli, Jay Norton and Dan Brown Jr. completed the field. Lightfoot, who captured the evenings lone heat race, led the early laps in the feature until Trimble was able to get by.

The traveling BCRA Midget Lites made their second visit of the season to Placerville Speedway on Saturday and it was all about Snohomish, Washington racer Chance Crum. The previous night saw the team earn a victory at Deming Speedway in Bellingham, Washington. They then hopped in their rig and hauled to California, which certainly paid off. Crum began the evening by setting a new all-time Midget Lite track record by clocking a blistering fast 11.848 and then came out on top in the 20-lap feature.

Scott Kinney, Dakota Albright, Hunter Kinney and Danika Jo Parker made up the top-five. The remainder of the top-10 was filled out by Gus Carcione, Craig Holsted, Tyler Chamorro, Jeff Griffin and Joseph Ferrolito. Chamorro got upside down in wild fashion, but luckily emerged from the car okay after catching his breath. Two very entertaining heat races were held that saw Scott Kinney and Hunter Kinney pick them off respectively. Thirteen BCRA Midget Lites were on hand for the event.

Full results from the night can be viewed at SpeedHive.myLaps.com

More info can be found at www.PlacervilleSpeedway.com