Buddy Kofoid on his way to victory Thursday on night #1 of the Trophy Cup. 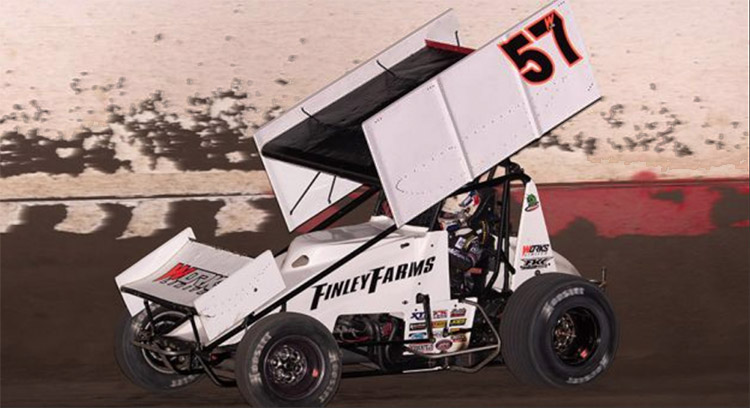 By Ron Rodda
(Tulare, Calif.) – Buddy Kofoid is the youngest to win a Trophy Cup main and a few years later won again after a yellow filled 30 laps to open the 2021 version. Anthony Macri made his California debut with a second ahead of DJ Netto.

It took an extra year, but the Abreu Vineyards 27th Trophy Cup Presented by Rudeen Racing opened the three day event at Tulare Thunderbowl Raceway on Thursday night. An 85-car field of winged 360 sprints packed the pit area for the first of two preliminary nights.

Cars were split into two groups with each having their own quick qualifier and four heats. Qualifying offered 150 points for the quickest lap with a one point drop while heats awarded 36 points to the winner with a three point drop per position.

B group’s fastest was DJ Netto at 13.707 and he was followed by Cole Macedo, Anthony Macri, Colby Copeland, and Rico Abreu.

Eight heats total moved the winners plus the highest point car in each to the night’s A main. The top 40 in points not yet making the A main raced a pair of B mains with a six inversion by points, and C main transfers were added.

The top four from each B main were added to the 16 cars from heats and the 30-lap A main inverted 12 by points.

Defending champion, Rico Abreu was a DNF in his heat when contact at the start led to front end damage. That led to starting 15th in a B main.

The B main fields were stacked. To quote the great announcer Fred Rannard Jr., “This B main is an A main anywhere else!” The first B main inverted Buddy Kofoid, Tim Kaeding, Willie Croft, Jason Sanders. Tyler Courtney, and Carson Short and only four would make the A main.

Courtney spun on the opening lap to restart 22nd and Short flipped off of the turn four wall while leading with 7 of 20 laps complete. Courtney was 9th at the red.

The second B main had a first lap mess with Abreu’s flat putting him 17th on the second try. After five laps Abreu pitted and again started at the rear. A 6th place finish meant missing the A main after winning all three mains in 2019.

Kaleb Montgomery led initially with Buddy Kofoid and Bud Kaeding following. Montgomery ran the bottom and Kofoid was up top for several laps and Kofoid was able to use the momentum off turn four on lap ten to lead.

Shane Golobic took 3rd and used the bottom of turn four to gain 2nd but spun later racing for the lead. Montgomery dropped out with mechanical problems moving DJ Netto and Anthony Macri up to podium finishes.

Macri closed on Netto and used the upper line in turn four to claim 2nd with two laps remaining. Macri closed on Kofoid but needed more laps to think about first.

Friday’s show will repeat Thursday’s format with group B qualifying first and the order within the group’s reversed.

Whichever point night is better from the two prelim nights will be used for Saturday’s lineups.