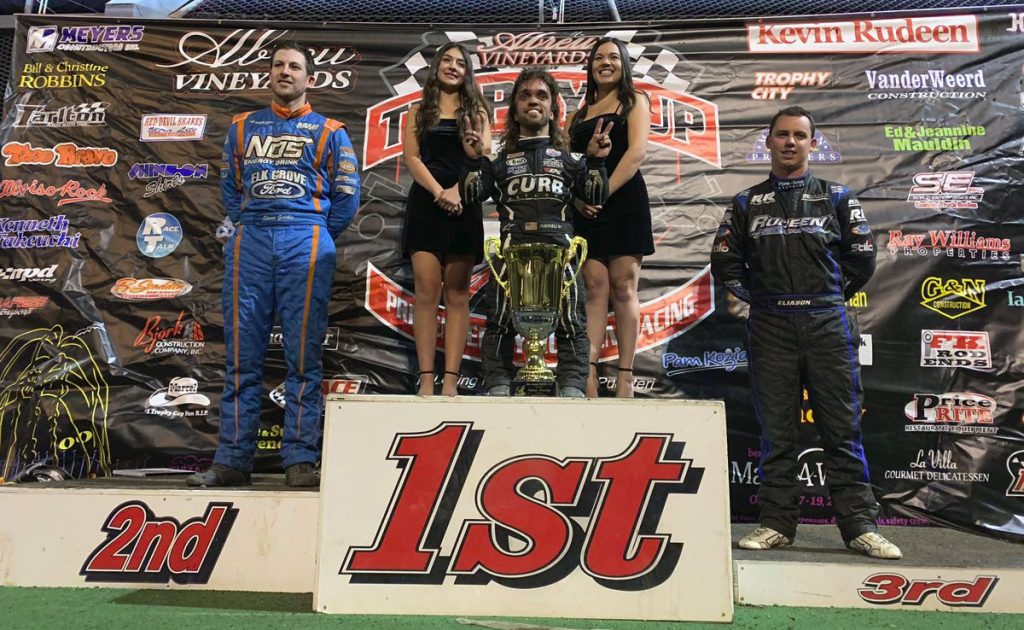 (Tulare, CA – 19 Oct) Rico Abreu did it all at the Trophy Cup when he won the Saturday night 50 lap main event along with the event championship, earning $26,000 for the three days of dominating sprint car racing.

The final night of the Abreu Vineyards 26th Annual Trophy Cup Presented by Rudeen Racing assigns the top 48 point cars to a heat race.  These very tough 10 lap races feature a complete inversion by points.  The standard 36 points to win with a 3 point drop is used.

The Saturday payout is listed at $109,505 but it will be considerably more.  The Cup champion is guaranteed $26,000 and money will be added to the amount won to reach that level..

Each A main Saturday starter is automatically part of the point fund and will receive a minimum of $5000 for the three days of racing.  About half of the A main field will be paid additionally above the standard purse amount to reach the $5000 total earned.

Between the normal payout and the thousands of dollars in added payout, the total paid is approximately $200,000.

After the 6 heats, the top 20 in points go directly to the main event regardless of finishing position.  The next 20 in points earn a B main starting spot, and the final 8 go to the C main, joined by transfers from D main racing.

With the top 48 in points assigned to a heat, the remainder of the 78 cars on hand were split into a trio of D mains.  The evening started with these mains, moving the top 4 from each to the C main.

Six heats followed offering an opportunity to earn more points to improve main event positioning.  Rico Abreu had a larger than usual point lead starting the evening, 6 points over Shane Golobic and 7 ahead of Jac Haudenschild.

Abreu’s lead evaporated after 2 heats when Golobic finished 4th to Abreu’s 6th to tie in points at 304.

Third in points, Jac Haudenschild, was caught up in a nowhere to go situation in his heat and lost ground with a DNF and fewer points.

Kyle Hirst was high point car in heat 4 and finished 2nd from 8th to take the point lead at 305.  Willie Croft’s win from 7th put him near the top at 300.

Heat 5 was Jonathan Allard’ s heat and he helped himself with a 4th leaving him 6 points behind Hirst.

The final heat continued the trend when Cory Eliason won from 8th to tie Hirst for the point lead, creating a cluster of drivers at or very near the top.

With only one B main the field was even stronger.  When Bud Kaeding blew on lap 24, Tim Shaffer and D. J. Netto got caught in the smoke and oil.  Shaffer had a flat and Netto hit the wall hard and 3-5 in the order lost their transfer chance.

Finishing the last 2 laps sent Mitch Moles, Buddy Kofoid, RAndy Hannagan, and Jason Statler to the A main.  Statler transferred out of the C main and ran the entire 50 lap finale to finish 16th after 95 laps of main event racing.

With a 20 invert by points, Kyle Hirst and Cory Eliason filled row 10 while Abreu and Shane Golobic started in row 9.  With one point separating the two rows, the champion would likely be one of these four.  The A main pays 150 points with a three point drop.

Aaron Reutzel led from his pole start with Jason Solwold and Chase Johnson in pursuit.  Johnson took 2nd on lap 3 with a low line drive into turn 1 and contender Willie Croft got spun and hit, ending his night.

Tim Kaeding moved into 3rd on lap 11 driving the high side out of turn 4 on the same lap that Rico Abreu used the low line into turn 1 to pass Shane Golobic and take the point lead.

The last 39 laps had Abreu in front of his three main challengers and he was in the point lead during that period.  Abreu kept 2 cars between himself and Golobic and a yellow on lap 32 led to the planned fuel stop.

Lap 35 was tough for Johnson when he flipped in turn 2 after running 33 laps in 2nd.  The restart had Reutzel continuing to lead with Solwold now 2nd and Jac Haudenschild 3rd.

The question became would Abreu collect his 3rd win and after some slider trading, Abreu was up to 2nd on lap 39 with T. Kaeding 3rd.  Abreu closed on Reutzel, eliminating a substantial lead in 6 laps, and Reutzel bounced off of the turn 2 wall on lap 44 to open the door for Abreu.

Reutzel recovered in time to hold onto 2nd but Abreu was gone and led the last 7 laps for the sweep.  Reutzel finished 2nd, T. Kaeding was 3rd, Solwold took 4th, and Haudenschild completed the top 5.

The 2020 Trophy Cup will take place at Tulare Thunderbowl Raceway on October 15-17.